Keep the faith and resist. As a Canadian citizen, I’m going to help you. I’m looking into this with my employer. I’ll have a special announcement to make next month.

The war in Ukraine took a portion of my attention and energy. My publishing activity was lower than usual. Yet, I do have a few highlights to share.

I published my thoughts and observations about Apple’s latest virtual event of 2022.

I didn’t know that I wanted a new display for my Mac mini.

At first, I had low interest in Apple’s first virtual event of 2022. Many people got the long-awaited non-pro display. Unexpectedly, I bought one. I wrote my observations about it, and I wish I had put a reference to Om Malik's comments about the display while doing so.

This project was a big undertaking for me. It’s like documenting an important part of my life. It’s only the beginning as there as many more articles to follow, including a behind-the-scenes look and a few surprises. So far, my story of owning an original Macintosh 128K and the Macintosh Plus.

1️⃣ It took more time than I wish, but Apple finally acknowledged the need to support Ukraine in its ordeal. Apple showed some courage.

2️⃣ Apple held their first virtual event of the year. This Reddit post presents a visual summary of the things that were introduced. I love those handmade diagrams.

3️⃣ Last year, with iOS 15, Apple introduced a new focus mode feature which was in fact an extension of the previously available “Do not disturb” feature. In “Better Focus with iPadOS 15 & iOS 15”, as you’ll see, I put the new feature to the test. there’s a lot to configure to make it work. While doing so, you may end up losing some important notifications or calls along the way, as reported in this Recode story and by Matt Birchler.

4️⃣ Fun short movie made by Apple about creating a startup and escaping the big corporation by doing so. Are Apple employees going back to the office soon? This video has nothing to do with work-from-home policy but is interesting nonetheless. Apparently, Apple is conservative when it comes to some human resources management decisions.

5️⃣ The badly managed App Store saga continues. If curation was so good and effective, why do so many rip-offs of the popular Wordle game exist?

A YouTube video from the Art of Photography channel asks people to help Skylum. They are the ones behind the popular photography processing application “Luminar”. It’s a company with people essentially based in Ukraine, and they need help to cope with this criminal war. One thing they ask for is drone donation which helps combatants locate the enemy or assess the surroundings to help them determine if it’s safe enough to go out. Everything can make a difference for them.

Here is another war-related item. Some American revolution veterans were photographed because they were old enough when photography as an art was merely a thing. Reminder: the American Revolution took place from 1775 to 1783 (Wikipedia). The first good enough photos were produced around 1840. This means that veterans were pretty old (most of them at 100 or older). If they fought war while in their forties, they were centenaries when posing for the camera.

Fast forward to today. The iPhone is the camera that you keep with you to document your world. When the iPhone first launched, it was more about having a great experience at taking or making calls. Over the years, the narrative evolved and photography took over. This tweet shows how much time was spent during each iPhone launch keynotes on photo-related features of the new iPhone. Very telling.

Earlier, I wrote about the role of drones in fighting the war in Ukraine. This video from one of my favourite photographers talks about how bad a drone photography session can turn. Drone photography is something I’d like to experiment one day.

Is the new MacBook Pro fast enough for Lightroom? According to this article from Cnet, It appears to be the case. At least 2.5x faster than on a previous generation of 2019 i7 Intel-Based MacBook Pro. Adobe software isn’t known to be the best piece of software to take advantage of Mac's powerful internals, yet it seems to perform really well on the latest Mac hardware.

As you probably know, I’m a big fan of Glass, a photo-sharing social network (see my profile). They recently introduced their iPad version of their application and will soon introduce their web experience. Glass on the iPhone was good, but on the iPad, it proves to be a liberating experience. The iPad is such a great device to consume photo content. Can’t wait for them to launch the web version which will be even more liberating. I’ve been testing it in private beta for a few weeks.

An edition of this newsletter without space-related imagery wouldn’t be the same. Here is Europa and IO passing by Jupiter. Wow.

War has unexpected side effects like putting at risk just recently adopted laws and objectives in order to help fight climate change. Since the beginning of the war in Ukraine, Europe is trying to lessen its dependency on Russia’s oil and gas. It won’t be easy. Turning to alternative and dirtier sources of energy could break the engagement to fight climate change with clean energy.

If there is something that you should watch today is this animation from NASA. It shows in a very telling way how much average earth temperatures evolved over the years. The trend since 1980 is undeniably worrisome.

By looking at the NASA animation, it isn’t surprising to see that Earth's temperature records are broken year after year for six years in a row. Side effects are numerous. The trend is clear to me. Is it for you too?

Earth is becoming so hot that both poles are showing much higher than normal temperatures, like the east part of the south pole experiencing 70 degrees over what is considered normal.

Another side effect of the war in Ukraine: is cyber-attacks from Russia against Europe interests. United States interests aren’t safe either. It’s nothing new, but recent sanctions against Russia are giving the criminals in Russia good reasons to fight back. It’s probably cheaper than real-life war too.

Be cautious with the software that you install too. A developer who wanted to protest against the war in Ukraine created a malicious version of an npm package that you install on Linux. The problem is that files got deleted and a “peace” message was left on the user’s machine while installing this package. The bigger problem is that this package “node-ipc” is popular and is part of a long supply chain for many other software. This security risk reminds me of the SolarWinds attack. The popular monitoring software got infected by malicious code injection related to the update process. It will take years to recover from that and assess the damage (i.e. compromised environments).

Have you ever used an application to obfuscate a portion of a text or an image? As a content creator, I do this all the time, using the excellent Cleanshot utility for the Mac (my review). Up until now, I was wondering if the obfuscation feature was secure enough. Probably not, tools exist to reverse the process and find the original content. A recent update, version 4.2, brings an updated algorithm, to create more secure content obfuscation as shown below. I did not test it against the tools to verify the claim.

In the End, we will remember not the words of our enemies, but the silence of our friends — President of Ukraine

"The wars will end and the leaders will shake hands, and that old woman will remain waiting for her martyred son, and that girl will wait for her beloved husband, and the children will wait for their heroic father, I do not know who sold the homeland but I know who paid the price" – Mahmoud Darwish

As they say: creativity is allowing yourself to make mistakes. Art is knowing which ones to keep. — Unknown source

Apple has made iPad better in new ways without making it worse in any existing way. — John Gruber

1️⃣ A lucid look at twenty years of 9/11 commemoration. Thanks to the war in Ukraine, we don’t forget past atrocities like this one.

2️⃣ Images can tell powerful stories. There are so many more images that I wish wouldn’t come to exist as much as they do now. While Russia is planting destruction in many Ukrainian cities, let’s do the opposite, and built new ones… with Townscraper, a game that I love (my simple review). Want to give it a try for free? Try the browser-based demo. Or see this showcase of towns built by players.

3️⃣ Why do I maintain so many blogs? For who am I writing? Does it bring long-lasting effects on people’s lives? Probably not, but I’m doing it for the love of creating something. I would argue that creativity helps live a longer and more satisfying life. That’s the subject of this article.

4️⃣ When your main product, at the center of your existence, is dying, something is wrong. Google’s search results quality isn’t what it used to be. The business of ads is poisoning their search results. The vast majority of my online searches are done with DuckDuckGo. It’s my default search engine on all my Apple devices.

Sometimes, to force a change of mindset, you have to send a forceful message. The following one by Zelensky’s entourage is a powerful one. Will you change your mindset and support Ukraine in one way or another? I will.

In this article, you’ll find interesting ideas for spending five minutes instead of being idle with nothing to do. Why do nothing? Why do we need to constantly do something? Pausing is also something to do.

This Telegram video is a good demonstration of what could come next if we let Putin have it all. It’s simply frightening.

Speaking of the devil, here’s a funny one.

This concludes the Numeric Citizen Introspection Newsletter #20 for March of 2022. See you next month for the next edition!

Building this edition of the newsletter took approximately five hours of work. If you enjoy my newsletter, show me your support through PayPal or by becoming a paid member here. Thanks a lot for your support. Sign up here 🙏🏻

If you don’t want to support my work, it’s ok too, but only if you support Ukraine in their fight against Putin and its rather weak army. 💪🏻

Remembering highly emotional moments during a visit to a concentration camp: Dachau.

Looking forward to my next trip to Europe and the many photography opportunities to come. 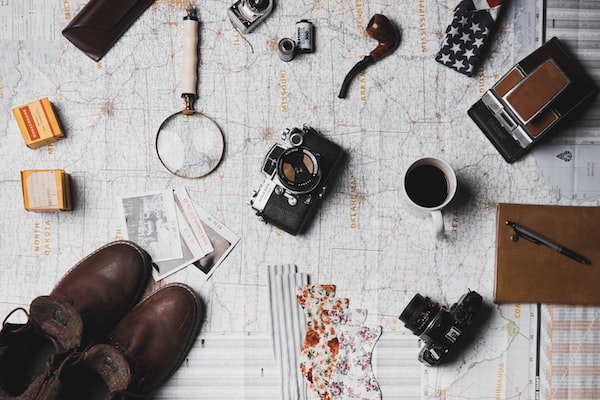